The Import Of Currency

The Import Of Currency
- by Rezwan Razack

The Import of Currency

Mr. Rangarajan was replaced by Mr. Bimal Jalan on 22nd November 1997.  This necessitated a change in signature.  Hence the Rs.500/- notes were printed partly with the signature of Mr.Rangarajan and remaining with the signature of Mr. Bimal Jalan.  There was also an additional change in the note where “M. K. Gandhi” was expanded to “Mahatma Gandhi” below the portrait on the obverse.

The below mentioned international banknote printers supplied notes to the Reserve Bank of India:

The exercise cost the exchequer around $ 95 million. 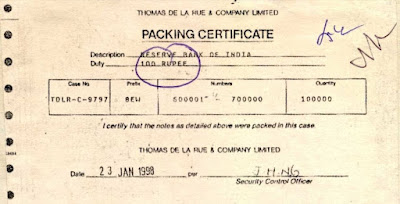 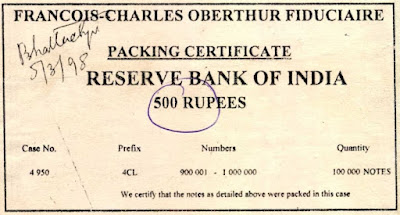 The import of this currency notes was in addition to the notes printed by Reserve Bank of India.

The Committee on Public Undertakings (COPU) criticized the Reserve Bank of India (RBI) and the Finance Ministry for outsourcing the printing of Indian currency notes amounting to a sum of Rs.1 lakh crore to three foreign countries in 1997-98.  The Committee described the move as “an unprecedented, unconventional and uncalled for measure.”

The COPU report was tabled in Parliament by its Chairman Mr. V. Kishore Chandra Deo.

The reasons attributed by the RBI representative to the Committee were “far from convincing”.  The Committee asked how a decision was made to get the currency notes printed abroad in three different countries.  “There was always a grave risk of unauthorised printing of excess currency notes, which would have been unaccounted money,” it said adding “that in any case the very thought of India's currency being printed in three different countries is alarming and during that particular fateful period our entire economic sovereignty was at stake.”

The Committee highlighted “the likely danger of destabilising the economy by the agencies or authorities who could have misused our security parameters vis-à-vis printing of currency notes, the use of such notes which could have been printed in excess could easily have fallen in the hands of unscrupulous elements such as terrorists, extremists and other economic offenders.”

The demand for bank notes has been steadily increasing. With a view to augmenting the production of bank notes in India and to enable the RBI to bridge the gap between the supply and demand for banknotes in the country the Government of India decided to establish two new bank note printing presses one at Mysore and the other at Salboni.

While all the lines of production at Mysore went on stream on 12th May 1999, the Salboni Press was inaugurated on 12th February 2000.

waooo nice information, thanks for sharing