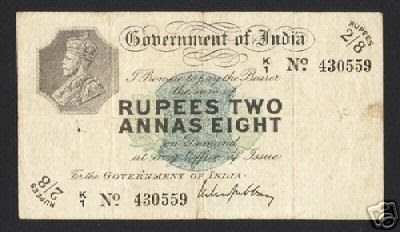 This is to bring to the notice of all concerned that I had paid for and purchased a note listed on E-bay a King George V Rupees Two Annas Eight note bearing no.K/1 430559 from Mohit Malhotra, Sydney, Australia and paid for it by Paypal which he acknowledged.

Mohit Malhotra sent me a postal receipt supposedly having dispatched the item referred above. I waited for over two months and the envelope never arrived. I was in constant communication with Mohit during that period. He kept saying that he will verify from the Post Office in Australia and let me know the status. I then wrote to the Australia Post Office to find out the status of the parcel. I was told to contact Mohit Malhotra. I wrote to him informing him this and enclosed the reply from Australia Post Office. From that day, he refused to respond or reply to my calls or e-mails.

I have reason to believe that Mohit Malhotra is a cheat. He sent me a proof of dispatch through a postal receipt which parcel I think was improperly addressed. The parcel did not contain the note for which he had collected money from me. The dispatch was an eye-wash and a trick. Mohit Malhotra is a fraudster and a con man.

If anybody comes across this note, I request you to please contact me and let me know immediately.

hello
its sad to hear your story.....which country are you from???

if you need it, then tell me your price offer on my email id-
guptasaumil2003@yahoo.com

Hi... I am planning bidding for the same note on ebay right now... what do you think is the fair price for it? do let me know through a mail on shomeg@gmail.com

Hi, I am willing to sell my Rupees Two Annas Eight Note. If anyone is interested in buying then please contact me on softroniks@gmail.com.
Thanks

I talked to Rezwan Razack on the phone a couple of days ago, to inquire about the opening of his bank note museaum.

I too have these notes. What are the security features etc. to validate the authenticity of the George V Rs 2.50 note?
Pl. inform to Geo at