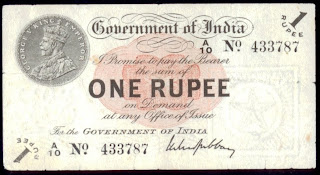 Unstapled Note without perforation on left side; Star enclosed in a rectangle watermark; 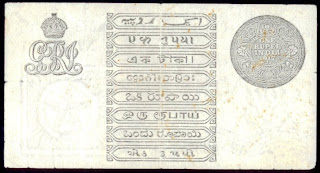 In July 1918, the German torpedoes sank a ship named SS Shirala carrying a consignment of 1 Rupee notes from England to India. This was the second print. These notes were pre-signed and were legal tender. This was the first case of notes that sank which were pre-signed before they arrived to India from England. Some of these notes that were washed ashore were found on the Southern coast of England. The notes with prefix ‘A’, ‘K’, ‘L’, ‘M’ & ‘R’ were part of this shipment that sank. There was already a quantity of notes with the above prefixes in circulation, which were withdrawn. Further re-prints for circulation continued with prefixes ‘B’, ‘C’, ‘D’, ‘E’, ‘F’, ‘G’, ‘H’ & ‘J’, and thereafter, from ‘N’ to ‘S’, with the exception of ‘K’, ‘L’, ‘M’ & ‘R’ as they were already used in the first issue and withdrawn. The prefix ‘I’ was never used as it denoted a number and not an alphabet. The prefix ‘Q’ was also not used as prefix ‘O’ had been used instead. The 1 Rupee Notes were printed with Prefix ‘A’ to ‘Z’ with the exception of ‘I’, ‘Q’, ‘T’, ‘U’, ‘V’ & ‘W’.

It is necessary to understand the circumstance and events that necessitated the printing and issuing notes of smaller denomination in India as until 1917 the smallest denomination of Indian Currency note was 5 Rupees. A huge distrust in the currency notes of all denominations arose from 1916. This resulted in the public encashing these currency notes into coins. The currency notes were also subjected to discount of its par value. The Government of India was put to great test in retaining the trust of the public in currency notes by converting them to silver from paper. The Government faced a situation where the silver got exhausted and they could not convert the currency notes in many cases. The World War I also added to the misery of the Government. Even gold sovereigns were offered to the public in exchange of the currency notes. This failed because they came back to the Treasuries as soon as they were issued. The rise in price of silver also did not help as people indulged in speculation and hoarded coins. This severe shortage and price rise in silver and other metals caused by the World War made people hoard silver for personal gains. The situation would have been quite drastic if USA had not supported India by melting 200 million troy ounces of silver and delivering that to India in 1918, which in turn produced 260 million silver rupees.

The Government of India, in order to economize and conserve the use of silver commenced issuing paper money of small denominations. Thus was born notes of 1 Rupee. This was followed by an issue of 2½ Rupees. They were issued to public directly from the Currency Offices from January 1918 onwards and from District Treasuries from April 1918. These notes could also be encashed at Post Offices. There was no restriction of encashment anywhere within the Union of India and had the status of being universalized.

The 1 Rupee and 2½ Rupees notes were very unpopular and were traded / accepted only on a varying discount, the maximum being 19%. They were accepted on par because of its wide acceptance and use from 1920 onwards.

The first issue of 1 Rupee was in the form of a packet of 25 notes, which were unstapled, therefore without any perforation on any side. There were instances of these packets containing irregular quantity of notes – lesser or greater than 25 notes, which were reported to the Controller of Currency. This necessitated in 25 notes being bound in a booklet either by stapling or stitching, from 1919 and resembled a miniature chequebook. The outer cover in red carried printed slogans to popularize Government Efforts and Programmes. These stapled / stitched notes have a visible perforated edge on the left.

Note with perforation on left side; ‘D’ Prefix - Universalised

· The only issue of Indian Paper Money having prefix ‘O’. 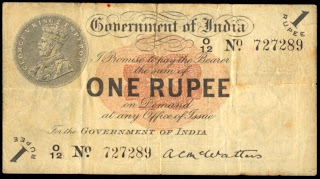 Only denomination in Indian Paper Money with ‘O’ Prefix

There is also a note signed by M.M.S.Gubbay prefix ‘X’ with corrected Gujarati on the reverse. This was because notes with prefix ‘X’, ‘Y’ & ‘Z’ were used for circulation in British East Africa. There was a split in signature in prefix ‘X’. A.C.McWatters signed the remaining prefix ‘X’ along with ‘Y’ & ‘Z’. This issue has the enclosed star watermark. 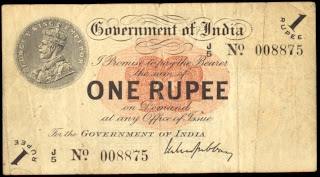 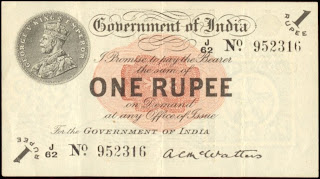 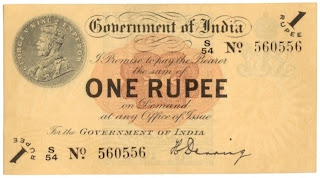 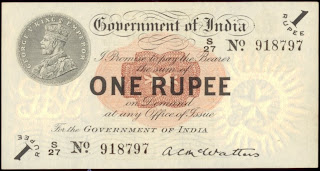 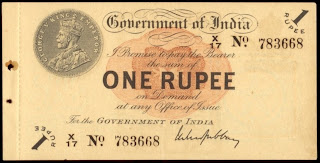 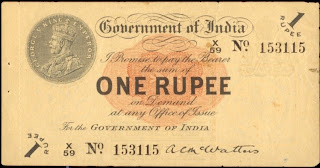 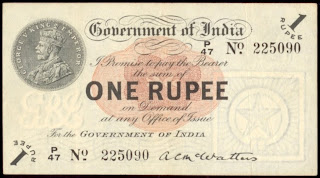 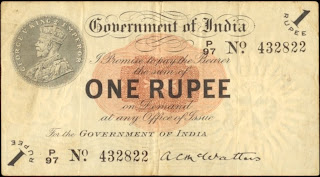 Posted by Rezwan Razack at 1:19 PM

Excellent article. I had been trying to pin down the exact number of issues for this note for quite some time. The details here are fantastic. Love your blog.

Fantastic information..am working in Reserve Bank for the past 39 yrs..and none here have the info you have, Sir. Congrats

Thats great piece of information good work sir . i will be great ful if u can get me more knowledge about 50 rupee note of king george V and certain scans if you can provide will be highly appreciated

Can anyone tell the exact price of this notes

Can anyone tell the exact price of this notes

What are the languages are printed in the note?