Inset As An Alphabet On Indian Banknotes

Inset As An Alphabet On Indian Banknotes 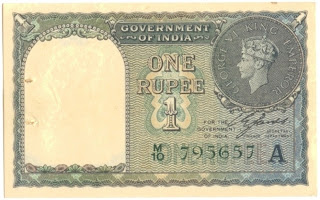 Government of India - One Rupee with portrait of King George VI - Inset 'A'
The Inset first appeared in 1945 on a One Rupee Banknote of Government of India with the portrait of King George VI signed by C. E. Jones, Secretary, Finance Department. This was necessitated because of the completion of the prefix 'A' to 'Z'. A new type with inset 'A' again commenced from prefix 'A' to 'W' with green serial numbers. Post independence, the Government of India in 1955 first introduced an Inset on One Rupee notes dated 1951 signed by H. M. Patel, Finance Secretary, Ministry of Finance. The Inset was an alphabet in uppercase in bold beside the serial number initially and later positioned beneath the serial number from 1976 onwards. They continued to appear alphabetically though signed by different Secretaries of Finance Department and reached alphabet 'I', type* 6.1.6.4H signed by M. G. Kaul in 1976. One Rupee notes of Government of India overprinted for use in Burma and Pakistan also have the inset 'A' - type* 5.9.1B and 5.17.1.
The Reserve Bank of India in 1957 first introduced an Inset on Five Rupees notes signed by H. V. R. Iengar. The inset on notes of Reserve Bank of India appears as an alphabet in uppercase in relief underprint beneath the serial number.
The purpose for the use of an inset is two-fold:
1. The use of an inset is to differentiate distinct series of banknotes. There are a large number of banknotes that are printed in India. Once a series is complete, instead of commencing a completely new series, an inset is included beneath the serial number to the same series. This creates a separate identity to the banknote. This process is followed even for insets on replacement notes with a star in the serial number.
Incidentally, from 2005 onwards, the year of printing is also incorporated on the reverse of the banknote. The same inset and serial numbers are once again used each year. 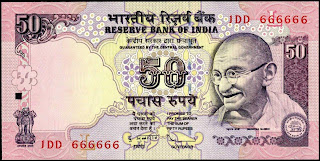 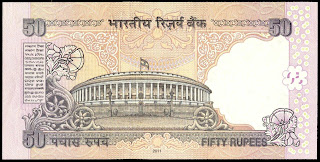 have linked this post to RBI Facebook page which is a closed group. Am sure they would find your fine research a treasure house

I have one question. Are banknotes with Inset letters more valuable than the ones without. If so then why?

how to contact to yours to deal this notes

Amazing blog posted. Thank you for sharing it.

thanks to this blog for sharing this gorgeous information.
Old Indian Coins
Thanks.

How to sell Indian notes.