As a part of British Empire that often remained outside the theatres of war, India served as a safe haven for housing the Prisoners of War. Camps were set up, often in places situated in the hinterland, during the Boer War and the two World Wars. The monetary transactions in these camps were facilitated by use of Coupons, as other forms of currency were prone to be forged by the inmates and as such were a source of impending economic danger. The first ever use of such Coupons is said to have been facilitated in the aftermath of the Revolt of 1857.

During the Boer War, camps were situated in the fortified towns of Bellary, Ahmednagar and Trichinopoly. Out of these camps, Coupons for monetary use are so far known only for the Trichinopoly camp and its camp at Kaity in the Nilgiris. These were issued in denominations of 8 Annas, 1 Rupee, 5 Rupees and 10 Rupees. 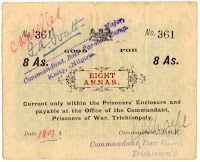 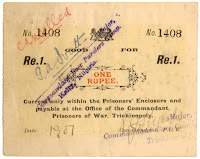 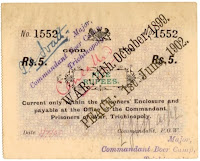 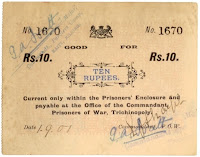 Several camps were created to house the German, Italian and Japanese prisoners during World War II and a complete listing of camps using monetary Coupons have been appended. Certain small Coupons used in the Central Internment Camp, located at Ahmednagar or Dehradun are also included.

In the aftermath of the Indo-Pakistan War of 1971, Coupons were issued for the use of Pakistani prisoners. However, the location of these camps is still a mystery.

Several POW Camps were set up in India during the Second World War for German, Italian and Japanese POWs. These camps were located in Ahmednagar, Bangalore, Bhopal, Ramgarh, Yol, Delhi, Clement town. The central internment camp was situated at Ahmednagar. The coupons were issued by each "Wing" of the camp and were authorized by the Camp Commandment.

Some of the salient features of the currency coupons issued for use at these camps: 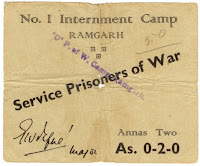 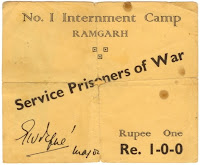 The Prisoners-of-war were interned in India in 29 camps forming 6 Groups of camps. In addition, there were two Civil Internment Camps at Dehradun and Deoli and one camp in Delhi for the Japanese prisoners captured in Burma.

Compliments it is a very interesting article full of informations and details, especially for a field of numismatic, like this of the coupons for Prisoners Of War (POW) where the informations are so few and very difficult to find.

I have five denominations of WOB CAMP 27

Dear Sir,
My father-in-law was an Italian prisoner of war. His records clearly state he was interred at "Ramgarh - Camp 12". I notice you have listed the Ramgarh camps as 17-20, and Camp 12 is listed as Bhopal. Could you please provide any further information, as we are just beginning to research his time in India, and would like to find out as much information as possible.
Thanking you for any assistance you can provide.
Kind Regards,
Marion

Marion,
Please let me know your email id for a reply.
You may write to me on properties@vsnl.com
Rezwan

awesome info...
any ideas if the same can be bought as I am collector of rare curency and stamps
thanks
:)

I have a 10 Rupee denomination coupon of 24 Clement Town Camp WOB.
Interested buyers can contact me at 09831263354 or mail me at srimalyasen@gmail.com

Any body know how much the POW 1Anna costs

i have note of rs 50 and his serial number is 444444 so any one buy this note please mail me on soniparth1992@rediffmail.com