By Rezwan Razack and Kishore Jhunjhunwalla 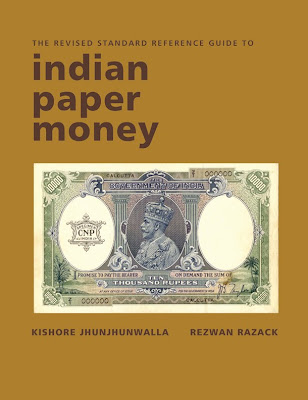 Email: indiancurrencymuseum@gmail.com
Kishore Jhunjhunwalla and Rezwan Razack have both been avid collectors of Indian Paper currency since their childhood. For Kishore Jhunjhunwalla, it became an enduring passion that has spanned a lifetime. From very early on, his attempts to research and learn more about this subject were frustrated by the lack of information. There was no single reference book or catalogue that he could refer to with his own considerable collection.
Mr Rezwan Razack’s journey into the hobby of collecting Paper money began over forty years ago, when as a child he had the privilege of assisting his grandfather, Mr. Hajee Abdul Sattar Sait, who had a collection of old and cancelled currency notes from a bygone era in their safe. His passion was further cemented when on his holidays with his family in Coonoor, his cousin Sadiq Haroon presented him with a collection of early Indian Banknotes.
Over time both Kishore Jhunjhunwalla and Rezwan Razack had accumulated considerable collections individually. In 2001, Rezwan Razack came upon Kishore Jhunjhunwalla’s book “The Standard Reference Guide to Indian Paper Money” and thus began an opportune partnership. To begin with both of them frequently competed against each other in acquiring the Indian Banknotes that came up for sale. This competition ultimately resulted in Rezwan Razack taking over Mr. Kishore Jhunjhunwalla’s collection. Hence, these two collections combined form the most unique collection of Indian Paper Money.
This edition of “The Revised Standard Reference Guide to Indian Paper Money” is a result of ten years of dedicated and sincere research. Mr. Rezwan Razack owes this creation to the dynamic team including Mr. Kishore Jhunjhunwala, Ms. Rekha Chandrabhanu, Mr. Bazil Shaikh, Mr. Murali Thantry, Mr. Sanjay Mittal and Mr. Mahalingeshwar Athani.
“The Revised Standard Reference Guide to Indian Paper Money” presents to Numismatists and Banknote Collectors the fascinating world of Indian banknotes.
The history of Indian bank notes dates back to 1770, when the Bank of Hindostan, a private bank situated at Calcutta issued its first banknotes of India. However, the earliest banknote to survive is dated 1812 is by the Bank of Bengal. This book includes a comprehensive listing of all Indian banknotes since that date, and is a unique publication of its kind on the subject.
The Revised Standard Reference Guide to Indian Paper Money includes the notes of the semi-Government and Presidency Banks, which functioned until 1861. The Government of India undertook the issues of banknotes in 1861 and that is when all Early, Private and Presidency Banks banknote issues ceased. The Government of India issued banknotes, which were Uniface with the Portrait of Queen Victoria in 1861, and the underprint series from 1867.
The Government of India Currency Department continued to implement this task through elaborate administrative machinery, specially created to facilitate currency management and distribution. All banknotes of India were printed by the Bank of England and shipped to India for distribution. The British India banknotes of King George V were initially printed in England. In 1928, the India Security Press at Nasik became functional and took over the printing of notes from the Bank of England Press. In 1935 the Reserve Bank of India was established and since then, it has been the only currency issuing authority and monetary agency for India. The King George VI portrait series were in circulation from 1936 till 1947. The Reserve Bank of India with the portrait series of King George V and King George VI were also overprinted for use in Burma. The overprinted banknotes of King George VI were used in Pakistan.
The Revised Standard Reference Guide to Indian Paper Money deals with banknotes of this entire period till 1947. The Indian banknotes since independence upto the current series of banknotes with the Portrait of Mahatma Gandhi are also a part of this book. These include the specialized note issues meant for use in the Persian Gulf Nations and money used by the Haj pilgrims.
The Osmania Notes of Hyderabad of 1919 – 1952 also form part of this book. The issue of banknotes by Jammu & Kashmir and the Hawala notes of Saurashtra States are also listed. The scope of this book extends beyond, and covers the issues of Indo-Portuguese for Goa and Indo-French territories at Pondicherry. The Cash Coupons of Indian Princely States that were printed on paper were issued to counteract the shortage of metal during Second World War. The Prisoner of War Coupons used as money by the prisoners of Anglo-Boer War 1899 - 1902, World War II and Indo-Pak War of 1971, who were interned in India are also illustrated.
The book has an entire chapter on Essays, Patterns, Proofs and Trials, which displays all the stars of Indian Banknotes that were designed but never made it for circulation. This chapter is very unique and is a result of persistent effort and research and obtaining this information along with images.
The salient features of The Revised Standard Reference Guide to Indian Paper Money:
1. Watermarks are described with pictorial illustrations.
2. All Security Features are captured and explained.
3. Life-size images are illustrated.
4. The intricate details on microprint, micro lettering, micro-tint, relief underprints and motifs on banknotes are described.
5. Well-researched and documented information on Issue Dates, Types, Prefix, Circle of Issue and Signatories.
6. Information on the Engravers, Designers and Printers of the Indian Banknotes.
7. Has 600 plus pages with over 1500 plus images.
8. Each banknote is given a Unique Type Number, which is compatible to any banknote software. This is a boon to Collectors, Curators, and Librarians for cataloguing.
To reserve your copy of this limited edition, contact:
Currencies and Coins : E-mail: indianmoney@yahoo.com; info@indianbanknotes.com
Price: Rs.6000/- or USD 125
The first copies of The Revised Standard Reference Guide to Indian Paper Money will be available from December 2011.
Posted by Rezwan Razack at 1:46 PM

Is there any electronic version available? I mean on CD OR DVD OR Online. If so, how much does it cost?

Would like to order a copy for the same. From where would i get it ?

for any questions please write to
indiancurrencymuseum@gmail.com